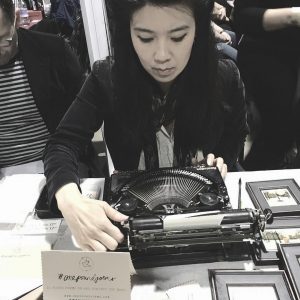 Amber Hsu (徐碧莉//xúbìlì) is a Chinese-born, US-raised, UK-based writer, filmmaker, visual artist, and small press publisher. She is also the creator of #OnePoundPoems.

She has written for the Royal Shakespeare Company, the Royal Court Theatre, the BBC, Islington Youth Theatre, and National Theatre Studios amongst others.

In 2014, she was awarded a Film London London Calling Award and commissioned to make her first short film: Next Time.

Her illustration work has appeared in such places as 3×3 and i-D magazine amongst others. In 2013, she conceived of and created Tiny Pencil — an independent, artist-led, anthology artzine and press dedicated to the lead arts.

Once, she also worked in a morgue.